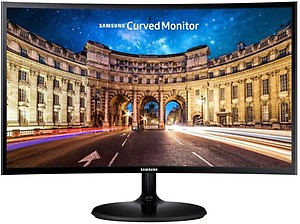 Not ready to buy yet ?

4 people have added this product to Wishlist.

Add this product to Wishlist for:

The prices in the Price Trend graph do not include coupon savings.

Very nice gaming or working it's very comfortable to view this monitor. I do programming for long hours which strain ur eyes but his monitor has option for eye protect which changes some color n reduce eye strain n when I play game I turn the the option game mode on which make games more sharper n brighter . Go for it . If u want to upgrade from old laptop screen to full big 1080p.
+Show more

A sharp and vibrant PC monitor

Sharp display and vibrant color reproduction. Use it for photo editing, and the output is true to real (got similar print out as you see on monitor from Vistaprint). Not using it for gaming so cannot comment on how fast the monitor is.It has a HDMI (supports 1080p) and a VGA connection and also a 3.5 audio jack in case you want to plug in your headphone/speaker for HDMI audio.A caution for those moving from flat screen to a curved screen for first time, it takes a little time to adjust for your eye to see from a curved surface.
+Show more

Hello! I received this monitor within 14 hours after placing the order, excellent job Amazon, thanks My current monitor is a Dell ST2420L, 5-yrs old, it started shutting off too frequently, tried couple of jugaads but, no results. Didn't want to spend time and money to get it fixed. Hence I began the new monitor hunt, a week of reading reviews of various monitors led me to this one.Pros:1. Excellent curve, few reviews mentioned the curve isn't noticeable but imho, it clearly is2. Acceptable number of picture modes (standard mode easy on the eyes)3. Super slim and light weight4. Easily accessible HDMI, Power & VGA ports (have to research why VGA still lives)5. Picture quality is superb and text is crisp & clear, better than in my old one6. Joystick controller is pretty neat but not sure about it's longevity7. Option to disable power LED, minor feature but very goodCons:1. Visible backlight bleeding (most annoying during dark movie scenes )2. Viewing angles other than from front are terrible.These two drawbacks, I guess can be overlooked due to the pros, and mainly because of the curve.There is one visible dark dead pixel which I think is normal.I have attached pictures that depict the backlight bleeding and viewing angle points mentioned above.Will update, touchwood, if I come across any issues. Hopefully never.Thank you, especially if you have read the entire review Update 08/08/2017:A bright red dead pixel appeared on the screen. I have raised a request for replacement. Courier service missed picking up the package today. Amazon rep Arif S escalated the issue and promised me that the pickup will be done tomorrow, and that he will ensure the replacement unit reaches by 8PM tomorrow. He said he will call back tomorrow. Will update about the replacement unit after receiving it.Update 10/8/2017: minus 2 stars due to below reasonsNever expected this from Amazon, a horrible experience. They missed picking up the package for 2 days. I had to talk to multiple reps who transferred my calls to multiple Leadership/Escalation Team reps, who escalated this issue 5 times already. Especially, one Arif S from Leadership Team promised the pickup of the monitor for 9/8/2017 as well as the delivery of replacement unit by end of the same day. Turns out he gave false information, according to another Escalation team rep Charan. As per him, replacement unit will be released only after the original unit is picked up. Also, the replacement, it seems, won't have the next day delivery like the original. Tried to get help from Amazon Social Media Team on Twitter but they too were unhelpful, to put it politely. Finally the pickup was done today afternoon. But the sad part is the replacement unit estimated delivery date is by 16/8/2017, which is totally absurd given that it was Amazon who delayed picking up the original unit. I've sent an email (7hrs ago) to Amazon describing the entire ordeal but nobody responded to it yet. It has been a frustrating past 3 days, total time spent on phone with Amazon reps has been over 3hrs, and neither any of the reps called back at least once to followup nor any of the reps tried to expedite the process of sending me the replacement unit. None of them took ownership.Update 11/8/2017:Received a call in the afternoon from an Executive Customer Relations Team rep in response to the email I sent yesterday. She apologized for the entire ordeal and showed empathy unlike the previous reps who just tried to butter up the conversation and washed off their hands from my issue. She said there is no way to expedite the delivery of the replacement order as it is already released and everything after that is automated. And I have to hope the package gets delivered sooner than estimated date since it's being shipped from within my city, Hyderabad. But I believe the courier would give least priority to this order because the guaranteed delivery date is by 16/8/2017, I told her this and I guess she understood. She gave me an assurance that they would listen to all my previous calls and provide appropriate feedback to the reps (every previous rep in my opinion) regarding the false info they provided and also for not taking ownership of the case. Upon my request, she agreed to call me back on Monday with any update, although she promised to keep an eye on this case and follow up accordingly.Update 12/8/2017:As per Amazon app, the package was dispatched today morning after 11AM. I emailed Amazon again with the tracking number requesting them to call the courier and expedite the delivery. Another rep from the Executive Customer Relations Team called me, I guess in response to the latest email. He said that the package has just arrived in my locality, and assured me that he will contact the courier to get the package delivered at the earliest.
+Show more

If the only thing you will do with this monitor is watch videos or play games, then this gives you the best bang for your buck! Go ahead and buy it with your eyes closed.But if you try to read any text below font size 18, the screen struggles terribly, and you start realising why this is the cheapest curved monitor available.The colour bleed is pathetic. Bright colours on black background bleeds quite far to the right.But then, I'm sure you wouldn't buy a 27" curved monitor to stare at word documents or read emails all day. The bleed somehow just vanishes when running a video or a game. Can't really complain that much, at this price.
+Show more

Amazing monitor. It has been just a couple of days since I got it. I am loving this monitor's feel. The screen is big enough for me, gets my work done, Multitasking is fun. Somehow 1920x1080 is little bit less resolution for this size. It would have been much sharper if it had more resolution. But then again, I guess in this budget this is what you get. Not bad. While working in Photoshop, if I look very closely then only I am able to see the failure of monitor's sharpness. Viewing angle from eye level is great. But if you are looking at the monitor from weird vertical angles, colors just fade away. There isn't pan mount on the monitor, I can only tilt it up or down. DOESN'T COME WITH HDMI CABLE.
+Show more

Did not meet expectations

Just go for it and you will feel the difference which can not be explained in words
See a problem with these offers? Let us know.

Disclaimer: Scandid is a search engine that crawls every online store in to find every product that is sold online. We currently show products in Books, Computers, Electronics, Appliances and Personal Care categories. Although we make every effort to present accurate product and store information, including prices and stock availability, Scandid cannot guarantee and is not responsible for inaccuracies or omissions. Please give us feedback on these results!
Two simple ways of getting this coupon.
Login using Mobile OTP

Sign In
See all the coupons for any product instantly. Receive price drop alerts via Email.
Add this product to Wishlist using your email

Please enter valid email id
We promise we won't share your email address with anyone
We will never spam you. You can always change your alert settings on My Alerts page.
Rate your shopping experience with
Currently rated of 5 by Scandid users.

See all coupons from
Please login to get more offers.

You need to be Sign in to see coupons.

Get coupon via Email

Sorry, we are not supporting IE7 and below version.

Never over pay again! Get the extension and start saving
Install Extension
Introducing Scandid
Your shopping companion, on the go!
Continue to Scandid on the web