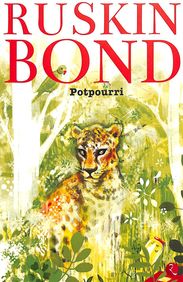 Not ready to buy yet ?

9 people have added this product to Wishlist.

Add this product to Wishlist for:

Potpourri is a highly engrossing collection of short stories that is based on a number of themes, ranging from horror to romance.

Summary Of The Book

Ruskin Bond has yet again captivated the hearts of his readers by launching a collection of short stories entitled Potpourri. This book contains stories with several themes such as crime, mystery, humor, romance, and horror.

Some of the short stories in this book include My Failed Omelettes and Other Disasters, In A Crystal Ball: A Mussoorie Mystery, From The Primaeval Past, The Zigzag Walk, Hanging At The Mango-Tope, The Girl On The Train, He Said It With Arsenic, Do You Believe In Ghosts, Susanna’s Seven Husbands, Gone Fishing, The Eyes Of The Eagle, A Little Song Of Love, At The Grave Of John Mildenhall In Agra, and At Sea With Uncle Ken.

In this book, Bond recollects some of the moments in his life at Mussoorie, along with several other places he visited, presenting the readers with an eccentric set of characters that will keep them glued. The stories present in this book are based on the lives of simple people, experiencing occasional sorrows. In the story, He Said It With Arsenic, the readers are acquainted with a murderer in the family of the author, while the story The Overcoat, revolves around a ghost located in the Himalayas. This collection of short stories by Bond is based on the everyday life of human beings, which makes it easier for the readers to relate to. All in all, Potpourri is a must-have for all die-hard fans of Ruskin Bond.

Ruskin Bond is a renowned Indian writer of British ancestry.

Apart from this book, Bond has written a number of other novels, and some of them include Rain In The Mountains-Notes From The Himalayas, The Lost Ruby, Four Feathers, The Boy Who Broke The Bank, A Face In The Dark And Other Hauntings, The Panther's Moon, The Kashmiri Storyteller and Hip Hop Nature Boy And Other Poems.

Bond was born on the 19th of May, 1934, and finished his studies from Bishop Cotton School, Shimla. After finishing his schooling, he wrote his first novel, The Room On The Roof. His literary works have been greatly influenced by his life in the foothills of the Himalayas. The Indian Council For Child Education recognized the major contribution made by Bond in the field of children’s literature in the country. In the year 1999, he was presented with the Padma Shri. He was also presented with the Sahitya Akademi Award by the Sahitya Akademi, India’s National Academy of Literature. He currently resides in Landour, Mussoorie.

Disclaimer: Scandid is a search engine that crawls every online store in India to find every product that is sold online. We currently show products in Books, Computers, Electronics, Appliances and Personal Care categories. Although we make every effort to present accurate product and store information, including prices and stock availability, Scandid cannot guarantee and is not responsible for inaccuracies or omissions. Please give us feedback on these results!
Two simple ways of getting this coupon.
One-click Login using

See all the coupons for any product instantly. Receive price drop alerts via Email.
Add this product to Wishlist using your email

Please enter valid email id
We promise we won't share your email address with anyone
We will never spam you. You can always change your alert settings on My Alerts page.
Rate your shopping experience with
Currently rated of 5 by Scandid users.

See all coupons from
Please login to get more offers.

You need to be logged in to see coupons.

Get coupon via Email

Sorry, we are not supporting IE7 and below version.

Never over pay again! Get the extension and start saving
Install Extension
Introducing Scandid
Your shopping companion, on the go!
Continue to Scandid on the web